Tree Roo in the Spotlight

As elusive as the tree kangaroo themselves, it seems so too are the people ensuring their survival. I was lucky enough to venture out to visit the only Lumholtz Tree Kangaroo centre in the world…right in the very state in which I call home. I spent 3 wonderful days with the only two tree kangaroo carers in Australia learning about an animal that very few Australians will ever get to see, and chances are may even be unaware of their existence. 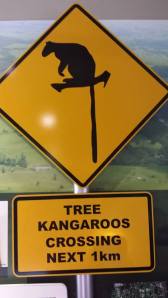 I read an interesting fact in a recent Australian Geographic magazine about this particular Aussie animal that is as seemingly as exotic to Australians as they are to people in other parts of the world. It reads, “A survey taken in Brisbane in 2003 revealed that only 36 percent of respondents had even heard of them- and this in the capital of Queensland, home to both Australian species.” I am ashamed to admit, that I was one of those statistics.

Warning signs along the highway alerted us that we had arrived in tree kangaroo country, where we’d be meeting Dr Karen Coombes, founder of Tree Roo Rescue and Conservation Centre. Driving into the tablelands I felt this unexpected rush of excitement as we closed in on Malanda. I’ve travelled the world to encounter exotic animals, and here I was on an adventure in my own country about to lay eyes on something I’d only recently known existed. A kangaroo that lives in trees!?  Part tree climber, part our most iconic Australian animal that puts us on the map. I have driven up and down highways throughout my life oblivious to the wildlife that I may be passing by. But this time I was on the edge of my seat scanning treetops and the rainforest floor just like I did when exploring the rainforests of Borneo. 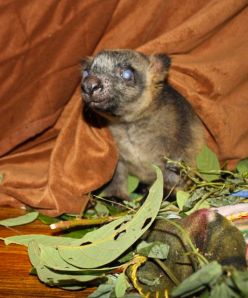 We pulled up at the home of Tree Roo Rescue where we met a very exhausted Karen who had just done the rounds of the morning feed. Karen is currently caring for 11 Lumholtz Tree Kangaroos, the most she’s ever had in care at any given time. It seemed we’d arrived at Tree Kangaroo high season and vacancy at Karen’s Inn was at full capacity.  In a normal year, she might receive 6 calls for rescue. And in the last 18 months, she’s had 26. And as if she doesn’t have enough on her plate, 9 of the animals in her care are blind and require extra special care. 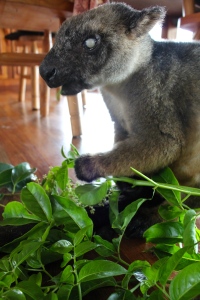 There was no time to waste, our introductions were as quick as a handshake before being handed a bucket of food where we would spend the day shadowing Karen in everything she did. From sun up to sun down, she just doesn’t stop. And she can’t. It’s not just the purpose built cages out the back that are currently occupied, but her two spare bedrooms also. It is here I lay eyes on my first tree kangaroo, Shelly. Immediately, all of my preconceived images flew out the window to see this unfamiliar animal in real time. I was completely taken by their incredibly long tail, and their striking prehistoric looks. It reminded me of something I had seen beside a Woolley Mammoth replica at an ice age exhibit at the museum. A prehistoric Australian mammal, maybe something like an early day koala.

I spend the rest of my time pointing out their similarities to many different animals all rolled into one. “It kind of looks like a possum crossed with a wallaby, no, a lemur crossed with a koala, no …a wombat crossed with a kangaroo!” Before too long I conclude with the idea that this animal is deserving of its own identity indeed. It looks, walks, hops and climbs just as it should- like a Lumholtz Tree Kangaroo. And it’s absolutely sensational. It really took me by surprise to understand how much we can take our own native wildlife for granted, which I guess is a big part of the issue at hand. I bet this is how it feels for tourists who encounter a kangaroo or koala for the first time. I loved the excitement I felt for one of my own, it was like coming face to face with a brand new life form. A furry little alien who I’d been sharing my country with for 28 years without even knowing it. Fancy that. 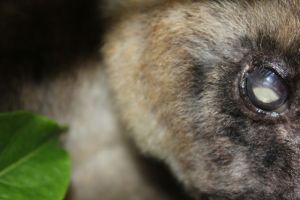 Lilly and Shelly are the occupants inside Karen’s house. Two special care girls that need around the clock care. They are both blind and too unsure of themselves to put in the enclosures like some of the others that are in different stages of rehabilitation. Shelly was found by the side of the road after being hit by a car, Lilly after a dog attack. Their blindness, like the other animals with this condition, is believed to be a result of the trauma. There is nothing that can be done to restore their eyesight. Blindness is something Karen says has been on the increase in the last 2 years. Blindness, and animals turning up in odd places far away from the rainforest. 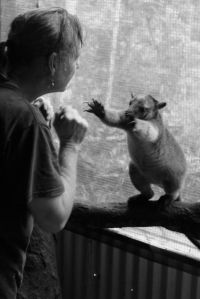 Karen took us to continue her daily feed, a routine chore, which I assumed wouldn’t take long. We followed Karen in and out of cages watching on as she dealt with the different personalities, which would greet her behind each and every door. Some of them just wanted to hug Karen and not let her go, others wanted to playfully bite her and some were too blind to see she was there but could sense her in other ways. And when I say ‘hug her’, they were reaching out their little, yet robust, arms to her like a little kid wanting to be picked up by its mother. And when she ignored them, they would protest by whinging (if you closed your eyes, you would have sworn it was the sound of a 2-year-old at a supermarket check out) and stretching out even higher. Each animal was so unique and needed different levels of care that it could take anywhere from a few minutes up to half an hour to get through each enclosure.  This was not a matter of opening the door and leaving them a plate of food, this was nurturing individuals complete with unique personalities of their own. And I loved Karen for exposing me to this. This is only the work of a genuine carer. 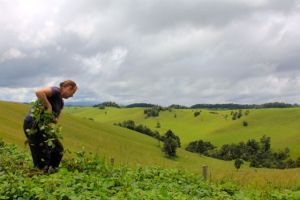 We were already sweltering in the far north QLD heat, but still had the biggest job of the day to endure. Cutting leaf! We went out into the countryside stopping by the roadside to collect some weeds, which Karen says they really like. We brought back bags of the stuff, traipsing through long grass cutting the freshest branches and leaves. I can’t say I was over enthusiastic when Karen warned us to watch for spiders in the privit. When we got back to the car, some large varieties of spiders came crawling out of the bag. She said it was just a part of the job she had learnt to accept. I couldn’t believe that this was a daily job for just one woman and I admired her dedication purely for leaf that will last just one day. 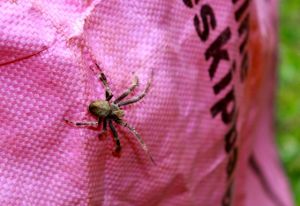 Karen has spent twenty-five years as a carer dedicating her time to rehabilitating our Australian wildlife. In 1999 she rescued ‘Mickey’, her first tree kangaroo and she would come to be one of their biggest ambassadors for their survival. Amongst the hands on daily care, she is hands on too with educating the general public about the threats facing this species. Wearing two hats, she’s the rehabilitator and the educator. An elusive animal, hardly seen by the general public, it is difficult to keep the tree kangaroo top of mind. To put it into perspective, in an 18-month period whilst undergoing her PHD, Karen found only 8 animals though spending days and nights tracking them in the rainforest. Her biggest disappointment is that the IUCN have them listed as ‘least concern’ after the results of a researcher who once claimed that they were abundant. Karen and her fellow wildlife groups feel strongly that they are ‘threatened’ and have disputed this time and time again to have their status upgraded. 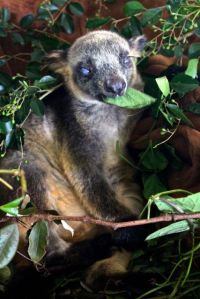 We got home, and it was time again for the afternoon feed. No rest for the wicked as they say. The girls, Shelly and Lilly, were delighted to have some fresh leaf surrounding them and sat quietly chewing through the branches. It really made it all feel worthwhile seeing their happy little expressions and contentment at the treats we’d returned with. I could see why Karen trekked into long grass for one special branch to bring home for the girls. Shortly afterwards, Lilly curled up in the centre of the leaf and went to sleep.

We were sweaty, smelly and covered in dirt and yet felt a real sense of satisfaction helping these animals that were in care mainly as a result of our own doing. By not fencing our dogs, by building highways through their habitats, by driving fast cars… I could understand in this moment why Karen does it, but I also considered what a huge weight it was to carry knowing that if you aren’t doing it, nobody else is. She can’t call in a sickie when it all gets too much, and she can’t take a holiday to Bali. This job requires 110% dedication. Vet bills, medications, enclosures and a half-finished treatment room are daily expenses and other tails, other than the tree roos, she has to chase. It doesn’t come cheap to Karen and her husband Neil. But at the same time, she’s doing this wonderful thing trying to turn around the negative impact human beings have had on this species and I felt immensely proud to spend a day in her shoes. 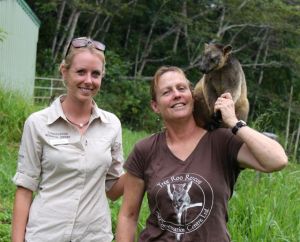 When we came to the end of the first day, I asked Karen if we could take a picture together at which point she worried about the state of her hair. I had to laugh, it was the first moment throughout that entire day I had seen even a remote glimmer of Karen thinking about herself. We agreed at the end of the day to take one collaborative sweaty, dirty picture depicting exactly the day as it was….hard work!

We spent another day, doing it all again, when I came to the conclusion…we must clone Karen. 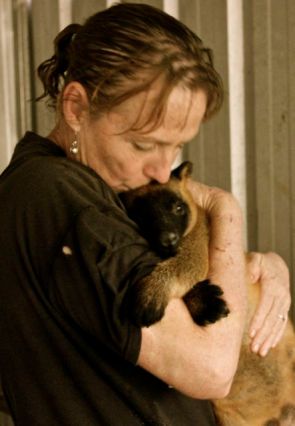 Karen is greeted each morning by a different little personality. This is Scotty, he just wanted to hug and not let go. 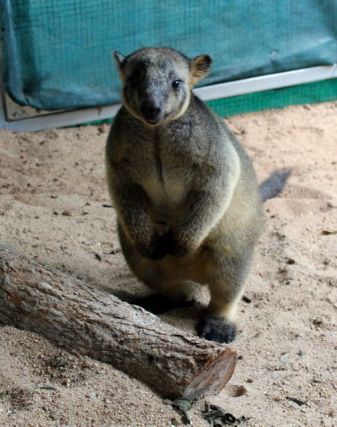 Little Zoe showing us how she can move her feet and hop around. 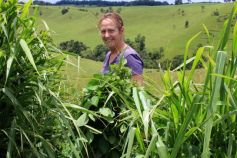 Little Zoe being told not to crash tackle Karen for hugs. 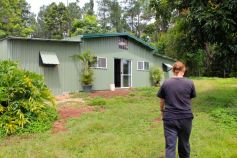 The new treatment room Tree Roo Rescue are building, but need further funds to finish it. 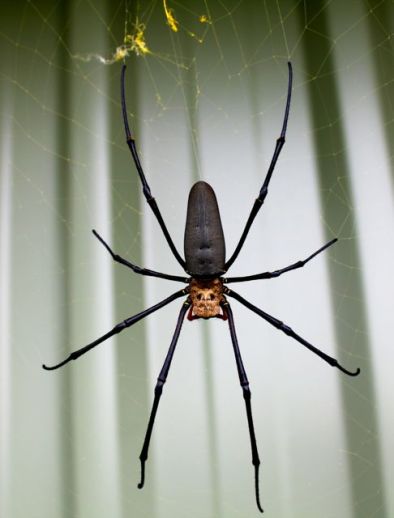 They sure grow big in the tropics. 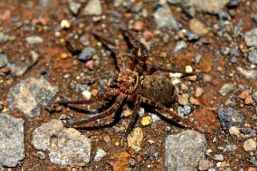 One of the many spiders that came crawling out of the leaf we collected.

A day’s collection of leaf.

Out the back of Karen’s property- tree roo habitat.