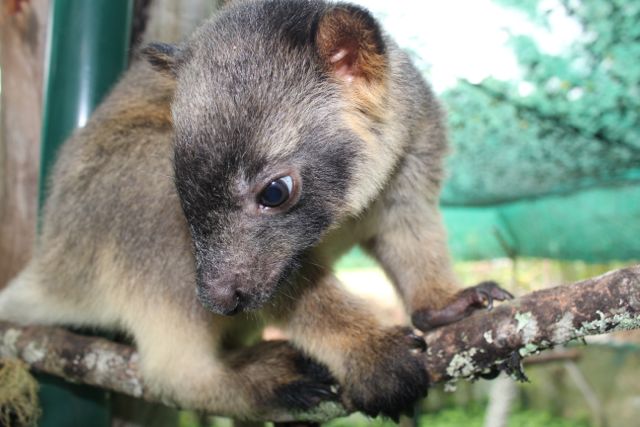 Margit is the only other carer for Lumholtz Tree Kangaroos in Australia. While Dr Karen Coombes from Tree Roo Rescue cares for adults, Margit cares and rehabilitates the orphaned babies ready for release back into the wild. She lives in the most incredible setting with the rainforest as her backyard, wildlife walking past every other minute. Pademelons, possums, birds…I would challenge anyone to count on just two hands the abundance of wildlife that pass you by in five minutes sitting in Margit’s backyard.

Thankfully for Margit, she doesn’t normally get as many babies as Karen gets adults. But raising babies is a whole other commitment. A baby tree kangaroo will spend 2-3 years with its mother in the wild, which means they are a 2-3 year commitment to Margit who will live as their mother for this duration. Everything from climbing trees to selecting the right leaf will be a part of Margit’s guidance she gives these babies in preparing them for the wild. While we were in town, Margit had 2 babies in her care- Anneli and Kimberley. They are hands down two of the cutest baby animals I have laid eyes upon. Their clumsy jumping, their fuzzy little heads and their incredibly huge feet which almost seem too big for them. I can’t say enough about those feet actually, they are so soft to touch that when they land on your hand it is almost like another human is holding your hand. They’re warm, soft and a little bit sweaty too. Still so young, they spend the day jumping in and out of her “pouch” which, strange to watch, is down her top. Margit walks around everywhere with two super long tails hanging out of her armpits, the sight takes a while to adjust to.

She is a really interesting woman who has cared for almost every animal you could think of since coming out to Australia from Germany 40 years ago. An ex-zoo keeper, she dedicates her time to rehabilitating wildlife. The weirdest thing for me to see was a giant poster on the wall of that old documentary about Cane Toads. It features a little girl who in the 70’s was filmed holding her pet cane toad ‘Dairy Queen’ who is the size of a small dog. We had to watch it in school, and I remember being fascinated by it. When I asked Margit why she had that poster she said it was her daughter in the picture. Dairy Queen was her pet. 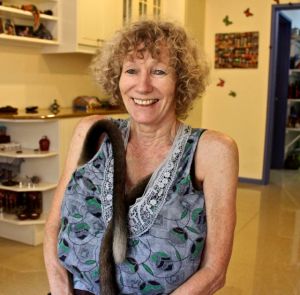 It turns out when Margit and her husband came out to Australia they ran a toad collecting business from their home. They would collect around 30, 000 toads a year, and humanely supply them for universities around Australia. It was a part of a cane toad eradication program at the time, and they did it for many years. She’s also the local snake catcher, this tiny 60-something-year-old woman, getting call outs from big burly blokes to catch a snake they’ve found in their house. She finds this quite amusing. 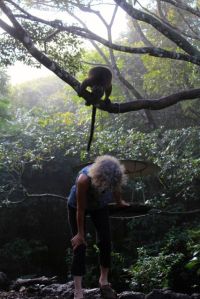 Photos on the walls, one after the other, depict her life caring for wildlife. She has raised a number of tree kangaroos from babies to adults, one of which is the infamous Geoffrey. Geoffrey was released into her 140-acre rainforest backyard 8 years ago and to this day still returns every day for a special feed. She told us we might be lucky to see Geoffrey but he didn’t come the night we got there, which we couldn’t help but feel disappointed about. The next morning, we were woken at 7am to Margit shouting, “Wake up! Geoffrey’s here!” I don’t think I could get out the door quick enough; maybe it was a combination of my own excitement and Margit’s enthusiasm about it. We went quickly down to the backyard and there was this muscly, brown tree kangaroo sitting on the low hanging branch peering into the house. There was something very magical about it with the fog lifting over the rainforest just behind him and this ancient looking animal sitting there trying to connect with us. Margit said she had to go and help him down, but he won’t let her touch him until he’s inside. So she kind of just bends forward and Geoffrey launches on to her shoulder. At 12kg’s, he’s a massive animal and looks rather sizeable on this tiny lady. He is incredibly solid, and you definitely wouldn’t want to mess with him. His arm muscles make him look like he’s been weightlifting out in the rainforest’s jungle gym. 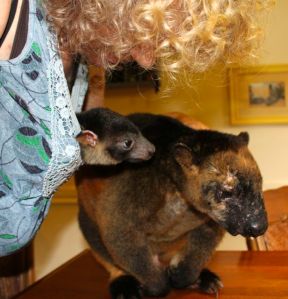 He came inside, and immediately jumped on the kitchen table and started munching on some almonds she had waiting for him while Margit made him up a feed as fast as she could. While he sat there we just admired him, he has this presence and really commands your attention. He had scarring on his face, the result of a fight with another male tree kangaroo after his release. While Margit presented him with his morning tea, little ‘Anneli’, the baby, popped her face out of Margit’s t-shirt and kissed Geoffrey and then jumped out on the table to share some food with him. She got these excited head wobbles which looked quite hilarious. His masculinity kind of put her in a trance. After he ate, he climbed on whoever was closest to be taken outside. He sat in the tree for a short time before hopping off into the rainforest to be a wild boy again. I wondered if he ever admitted this to his wild friends or was this Geoffrey’s little secret human drop in centre?

We sat eating breakfast, which was unlike any dinner table I’d sat at. In the middle of conversations a little head would pop out of Margit’s top to see what was going on and then disappear. Margit would keep talking as if it was a normal thing, and yet I had to pinch myself by experiencing such an encounter. After breakfast, Margit said we could take the babies up to the exercise enclosure to let them play. She does it every day until they get tired. Tree Kangaroos are born pretty clumsy and need to learn how to climb. They were so gorgeous, hanging and swinging and climbing these tree trunks and ropes she has had built for them. A good game to play together now, but in the future these two females will want nothing to do with one another. They are highly solitary animals competing for territories of their own. Margit told us about an incredible fight she’d seen between a wild tree kangaroo and a rehabilitated tree kangaroo she had raised and sent out into the wild wearing a tracking collar. The wild tree kangaroo was incredibly aggressive towards this collar. Upon further investigation, Margit realised that the collar had previously been utilised in another tree kangaroo project and had been worn by a male. That tree kangaroo could smell it and had shown his aggression taking this out on the poor female. 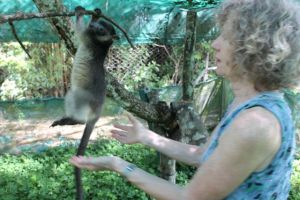 We stayed there with them until it was clear they could play no longer, and the second Kimberley jumped into Margit’s arms she fell fast asleep.

We sadly had to leave Lumholtz Lodge to return to the normal world where few people will get to experience days like the ones we had just encountered or know about these amazing animals. We went in knowing absolutely nothing about this animal, and walked away feeling like we had learnt so much. Not just about tree kangaroos but the incredible women who are ensuring their survival.

We thank Margit for taking the time to show us the important work with rehabilitating these babies. The best news is, you can experience this for yourself by staying at Margit’s beautiful bed and breakfast named ‘Lumholtz Lodge’ in the Atherton Tablelands. Margit’s hospitality and storytelling are second to none. It is an experience you won’t forget and you might just be lucky to catch a glimpse of Geoffrey.

A possum asleep in the outdoor furniture 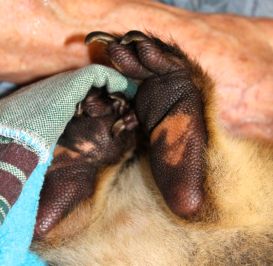 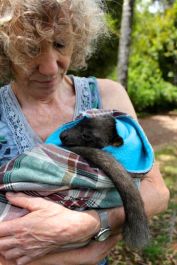 It all gets too much at tree school. Kimberley is ready for a nap. 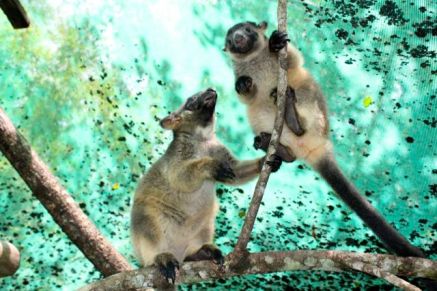 Anneli and Kimberley at tree school

The amazing rainforest in Margit’s backyard. 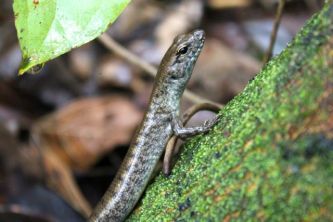 Rainbow lorikeets coming in for breakfast. 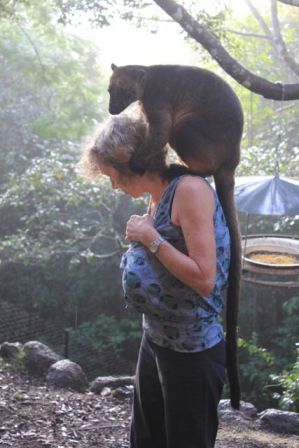 Geoffrey arrives for his breakfast.

A wild boy now, but not too wild to drop in from time to time. 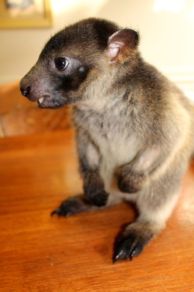 Anneli with a little bit of breakfast poking out of her mouth.

Geoffrey on the kitchen table.

Geoffrey takes a last look around before disappearing into the rainforest.

A little wild pademelon at our feet. 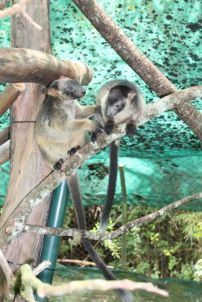 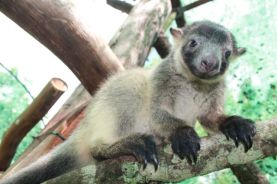 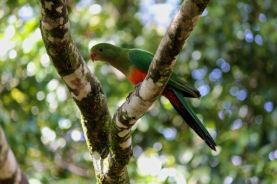 Kimberley shows us how she can climb to the very top of the jungle gym.