Coming face to face with Nala, Hervey Bay’s iconic Humpback Whale is a memory I will never forget. Out of an increasing population of going on 13, 000 East Coast Humpback Whales emerging annually in the shallow waters off Hervey Bay, it was a unique encounter with a local legend who has quite an interesting story. 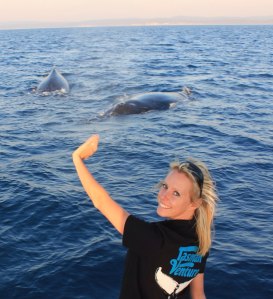 Up close and personal in Hervey Bay.

I had just finished putting together a conservation event in Hervey Bay, the home of the Humpback Whale. The focus of the festival that year had been about ‘Nala’, a female whale who had been returning to the Bay for nearly 30 years. She was known to the whale watch industry, and to researchers Trish and Wally Franklin from the Oceania Project who had been making photographic identification of Nala and her calves since 1992.  And though she was a special whale in the hearts of those in the industry, to me and everyone else in Hervey Bay she was unknown. After doing my research on Nala’s story, I became more and more interested in her amazing journey. I decided to focus the festival on her safe return from the southern ocean to her home in Hervey Bay for the start of this particular whale watch season. I wanted locals to know her story too, and for her to become more of an ambassador for our region and to help highlight the issue of whaling. Directly connecting the whaling issue to Hervey Bay’s world famous whales.

Nala is one of around 2287 whales identified by the Franklins, and one of 480 they have compiled long-term histories on. When they first identified Nala in 1992, they filmed her feeding her calf Panther. Since then, she has been sighted on over 50 occasions in the area. In all but one year, she returned with a cute little calf in tow. A super Mum.

What came as a shock to me was learning that Nala, a loved local, encountered a very dangerous path along her migration each and every year. While I knew whaling was an issue, I had no idea that our own humpbacks who attract thousands of tourists each year for the chance for a whale encounter in our waters, were passing through Australia’s southern whale sanctuary on their way to and from Hervey Bay. A sanctuary where the Japanese whalers conduct their lethal “scientific whaling”. It was the next fact that rocked me to my core. Nala had a experienced a very close call of her own.

In March 1997 Nala was photographed in Antarctica, and shot with a biopsy dart, by the Japanese ‘lethal’ scientific whaling expedition.  Fortunately she was sighted and photographed in Hervey Bay by Trish Franklin, in August 1997.  This was an eye opening fact for me that any form of whaling in the Antarctic Whale Sanctuary is a threat to Nala, her calves and all eastern Australian Humpback whales that call Hervey Bay home. It was a strange thought for me to think that the very whales who people paid top dollar to fall in love with, were then risking ending up on Japanese whaling decks. The very whales like Nala who had long family histories and stories.

Paddle Out for Whales event.

Nala’s story needed more attention, hence the introduction of our awareness event, Paddle Out for Whales.

The eastern Australian humpback whales were taken to the brink of extinction during the last period of commercial whaling.  Their population crashed from 45,000 to only 100 individual whales surviving by 1962.   Nala is descended from one of those 100 survivors. She had made it into my books as a real legend.

To me, Nala was this amazing ambassador for her own species. I was satisfied knowing this, but became increasingly anxious to hear about her safe return at the start of the upcoming whale watch season. Would anyone see Nala? Would she return safe and sound for another year? Out of the 13, 000 expected to return this year, I figured it would be like finding a needle in a haystack to find Nala. I remained hopeful that somewhere out there in Platypus Bay Nala was frolicking happily in our warm waters.

The thought never crossed my mind that I would get to find out for myself. When the chance came about that year to join Trish and Wally on their annual research expedition, I never imagined that I would receive the encounter of a lifetime. Every day, as I experienced pod after gorgeous pod, I ponderered if Nala might be out there, just on the horizon.

One morning on the trip, we were treated to another morning of great whale watching. So many close encounters with mothers showing off their new calves. Mid-morning, we had sighted a calf with quite a protective mother, after watching them surfacing together for about 5 minutes, Wally made the exciting announcement that he thought this whale could be Nala. Only the day before, I sat on the front of the boat wondering if she would return safely this year, and if anyone would see her. With the amount of whales that pass through the Bay, it wouldn’t be hard for them to remain undiscovered. To think that we could be looking at her was incredibly exhilarating. Wally couldn’t confirm it was her until she revealed her fluke‐ her unmistakeable unique fingerprint. Every time she lifted her tail slightly we held our breath, but she didn’t fully extend her tail‐ she wasn’t giving herself up that easily!

Nala lifting her calf to show us.

She had two interested males trying to get her attention as she nurtured her calf. After about ten minutes, we lost sight of her and we were all pretty devastated. I can’t compare this level excitement to anything else I had experienced. The chances of seeing Nala just seemed against all odds. For the next few hours, Wally tried to find her again and we were all on the look out for the whale we thought to be Hervey Bay’s most famous. Finally‐ we caught sight of her again‐ and she did it, she revealed her famous fluke! Wally confirmed it was her, and sent a radio call to the whale watch operators to let them know she had been sighted. We all clapped and cheered with excitement. I couldn’t believe it‐ I was on board for an encounter with the whale I’d only dreamed I would ever see! It was so exciting, words cannot describe.

After the word was out, the calls over the radio didn’t stop for the rest of the day, “Wally is it true? Have you found Nala?.” The excitement was contagious. Out on the sea were Nala’s long lost friends, dying to hear if their dear friend had returned home. Something we were not privy to back on the mainland. Nala had a beautiful baby female calf, estimated to be around 3 weeks old. The calf was curious and playful, and Nala showed her good mothering skills keeping her a safe distance from the boat and the male escorts. Nala continued to lift her up using the top of her nose out of the water. She was a beautiful, gentle mother.

After finding Nala and her calf, we put a call out to the Hervey Bay community through the local media to come up with a name for Nala’s gorgeous new calf. The new name will be used in Trish and Wally’s research data for future sightings of the calf in years to come. The chosen name was ‘Mirrhi’, an aboriginal name meaning ‘little girl’. Although Nala’s calves have traditionally been named after characters from The Lion King, the new name is a beautiful departure from Nala’s previous calves.

Fingers crossed there are plenty more encounters with Nala over the years and she returns safe again next year. Nala was reported to be sighted in Platypus Bay for the week following our sighting with her, a lot longer than the average 4-5 day stay of mothers and calves.